To support the monitoring of buildings, the research project DigitalTWIN shows how double skin façade elements in buildings can be operated more effectively and efficiently in the future on the basis of networked information and interactive instructions. For this purpose, the façade elements are equipped with sensors that measure important characteristic values in the cavity. 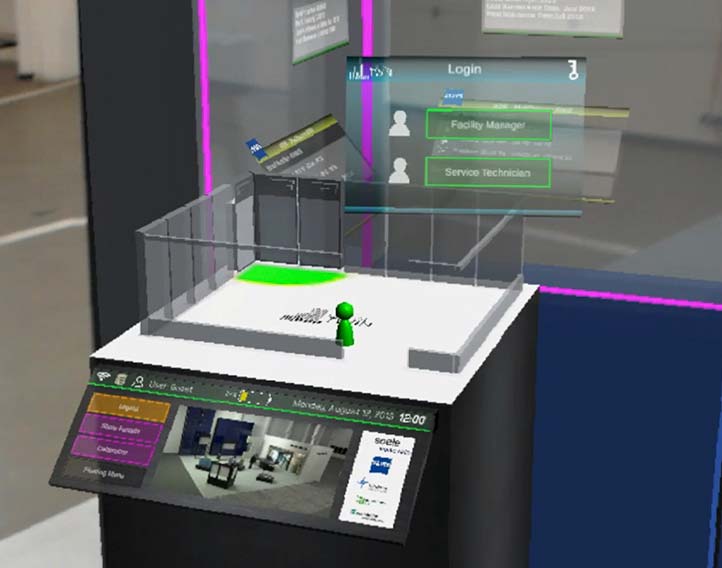 In a project due for completion in 2021, renowned partners from industry and research will develop digital tools and methods further in order to bring together and automate services, processes and procedures along the construction value-creation chain. In the DigitalTWIN (Digital Tools and Workflow Integration for Building Lifecycles) project, the priority is to gain a full understanding of interdependent, interactive systems, which is why the research partners have been drawn from very different industries. DigitalTWIN is being funded within the scope of the “Smart Services World II” programme of the German Federal Ministry for Economic Affairs & Energy. After the start of the research project in June 2018, the market conditions, technologies and standards were analysed and the core technologies selected. In addition, the consortium developed three Use Cases, which address exemplarily relevant issues of digitisation in the construction industry. Use Case 1 deals with the simple availability and visualization of live measurement and test data at the building using the digital twin and edge cloud and cluster computing technologies.

Sensor technology in the ISOshade® component from iconic skin GmbH

The ISOshade® construction element from iconic skin is an insulating glass unit with integrated solar shading consisting of a triple glazing and an intermediate room with an internal solar shading system. The intelligence of ISOshade® lies in the sealed cavity, which self-regulates climatic loads using a building physics principle. ISOshade® is suitable for all façade types and is also suitable for use in high-rise buildings. Therefore, the building operator is particularly interested in continuous monitoring and early detection of faults and damage in order to carry out maintenance work in a targeted manner.

With the DigitalTWIN sensor technology, which is integrated into individual elements, conclusions can be drawn about changes due to weather influences, deviating individual conditions or critical temperature and humidity conditions. In order to provide easy-to-use user interfaces for building operators and maintenance staff, a novel cloud cluster architecture based on platform technologies is used to enable online and offline scenarios. The platform uses scaleIT technology stack (software components that build on each other and form a platform). It includes microservices for IFC/BIM data, sensor value acquisition, transmission and storage as well as middleware (software for data exchange between application programs under different operating systems) for data processing and visualization using mixed reality software unity.

Currently, information on the condition of the ISOshade® component can be retrieved using the built-in sensors, changes can be detected via time series analyses and the sunshade can be operated via the digital model. Intuitive user interfaces display the status of the façade in real time: Maintenance traffic lights report, for example, if the limit values are exceeded as a warning or alarm. In addition, the warnings and alarms are transmitted to the integrated HoloLens as tasks for the defined roles of facility manager and maintenance engineer.

The sensor network solutions from research partner Carl Zeiss 3DA were installed in the ISOshade® for this purpose, as this hardware had already been tested by Zeiss as a multisensor together with the multisensor application developed for measurement rooms. Features of this development, consisting of hardware and software, allow the system to be configured individually so that the user can define the desired limit values. For use in ISOshade®, the software has been extended so that continuous condition monitoring can be implemented. Simulated warnings or alarms are imported into these demo modes, which then serve as tasks for the facility manager and maintenance engineer in the augmented reality environment. The software components include further components such as the HHI middleware, which simultaneously distributes information to all clients, and a model data app specially developed by the façade specialist seele. The model data app contains a database in which the individual components of the facade elements remain in ifc4 format together with their properties, such as hierarchy information.

Demo 2 of Use Case 1 is a milestone for the DigitalTWIN research project, as the required system architecture and important microservices for networking object and metadata as well as their visualization are applied. In the further course of the research project, this architecture will be transferred to other applications, supplemented by additional end devices such as laser scanners and 3D printers, and shown in more complex application scenarios in the exchange between planning, production and assembly on the construction site. The demo is currently available in the iconic skin showroom and will be exhibited at various events, such as digitalBAU in Cologne next year.

You can experience the demo under the following link: youtu.be/2e7_JzS1vsU